“I was born in the East End of London, Poplar, near Bow; so I am a Cockney. I came to Worthing when I was 6 and my father worked at Onslow Court at the bottom of Brougham Road. The block of flats belonged to Knight & Co, which when I was asked by one of the girls at school did they belong to my father, I said yes as my maiden name was Knight. They were the luxury flats of Worthing which were Winchelsea Court, Onslow Court, Downview Court, Hastings Court and Romney Court.

“We used to have Bertran Mills circus in the next field where I lived which belonged to Pearson’s Retreat and having the abattoir also in Brougham Road we would see the cows and sheep that came from the station to be slaughtered as they walked through the streets. This was like wonderland. It was 1936.

“Then of course things changed. We were “invaded” by the French Canadians and Worthing was a big garrison ready to go to Dunkirk for the rescue of the men from France.

“I was then evacuated from Worthing, having attended Lyndhurst Road school with Miss Wilson as the headmistress, and was sent to Leicester where I was put on a smallholding and had to work very hard as the lady’s two sons were called up for the Navy. I was with another girl, Brenda King, who when one day I was told to scrub the pantry said “I will do it for you Kit” and I said “No I’m Cinderella you’re the ugly sister”.

I came back after two and a half years and within the first week a German aeroplane tried to shoot us as it tried to bomb the gasworks. I could see the pilot and his goggles as we were running across the playground to get to the shelters. Also soon afterwards a German plane came down in Lyndhurst Road killing nine French Canadian soldiers.

“At 14 I was put in a bakery at Broadwater to keep away from the soldiers when the soldiers would come to us on their route marches for their cup of tea and cake. I was too young to appreciate them but the other girls in the shop had a good time as they would take them back to their camp for dances but make sure they got home safely at night time.

“My grandfather was a master baker and my three uncles; one was Lumley’s (my mother’s sister married), my mother’s twin brother was Joe Harrington who lost his shop in London and came to Worthing and was porter of Downview Court and my Aunt Kate’s husband was a porter in Hastings Court. My mother’s eldest brother had five shops in Hove and Brighton, he was Jack Harrington.”

Older
All in the numbers
Newer
The Letter Behind the Radiator 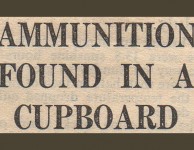